With many people seeing vegan food as being dull, or limited, or even just salad and potatoes, the Up Beet Food Company has set out to prove them wrong. Its ‘Voyage of Discovery’ Supper Clubs, held at Tom Foolery Coffee Company in Shoreham every other month, celebrates the range and diversity of vegan food, both in the UK, and around the world.

I went along to the Best of British Supper Club this week, and was pleasantly surprised by the traditional British dishes, reworked for a vegan diet. Arriving at the venue, i was greeted with a number of sociable sharing tables, making lone diners and groups feel welcome, with a copy of the menu to peruse and a list of the vegan drinks on offer that evening.

Here is the menu:

Chips with Everything!
Sharing bowls of home-baked vegetable crisps sprinkled with sea salt

The leek and ‘cheddar’ tart was a real triumph, the pastry was crumbly, and good enough to rival any shortcrust pastry i’ve had before. I spoke to the chef, Jenna (who was lovely) and the cheddar-style filling wasn’t made using any vegan cheese substitute, it is a mix of silken tofu, butternut squash, nutritional yeast and mustard, and had a wonderfully nutty and rich taste. In the words of the diners next to me “vegans have an answer for everything!”. Quite true. My only criticism is that I would have liked the caramelised onions to have been warm, but that’s just personal preference.

The mushroom and chestnut stew was one of those dishes that you would give a meat eater. By that, I mean that is had all the qualities of a thick, rich and hearty stew, just without the meat. The dumplings were some of the best i had (an opinion that was echoed by my fellow diners), and the smooth vegetable mash and crispy kale provided great texture and taste to this well sized dish.

For dessert, the poached fruits with meringue, yogurt and rose syrup offered a light course to finish off the evening. The highlight for me was the rose syrup, which brought the dish together. The secret of the vegan meringue? Aquafaba (chickpea juice)! This works in the same way as egg whites, and although it doesn’t offer the chewiness that i like, it is light and fluffy, and can be used in a whole host of sweet treats, including mousse (which I have tried, and failed, at).

Just one thing that I thought could be improved on was the timings of each course, as some diners were close to finishing their food before some had even started. This was only because there was a large number of guests and only a couple of people serving/cooking, which kind of adds to the charm of this pop up and means that you know exactly who is cooking your food.

There are other pop up events by the company, so take a look at the website to find out what Up Beet is up to: https://upbeetfood.wordpress.com/ 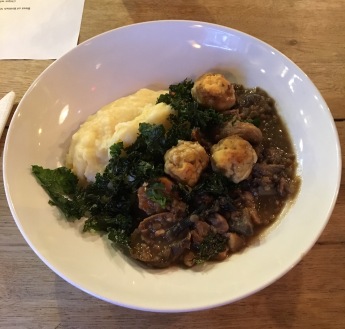